Another month of 2021 has passed, and with it 11 new coral frames have been built and planted at the Sheraton Full Moon Resort & Spa in the North Malé Atoll of the Maldives. There were 3 small frames, 1 heart-shaped frame, 1 medium frame and 1 large frame: that’s 341 coral fragments!

A significant portion of the frames at the Sheraton were due for their biannual photoshoot. Every 6 months our Reefscapers teams take four photos of the frames from four different angles. These photos are uploaded onto the Reefscapers website, and a link is sent out to the sponsor of that frame. Therefore, our sponsors can see how their coral frames are doing and see the growth over time. The images below show just how much coral fragments can change in this time! 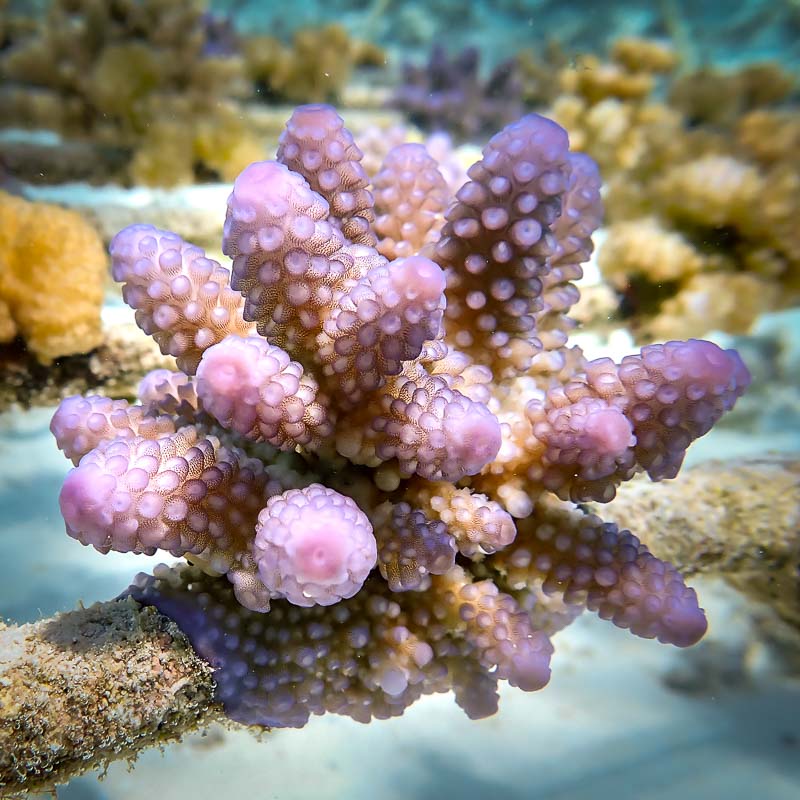 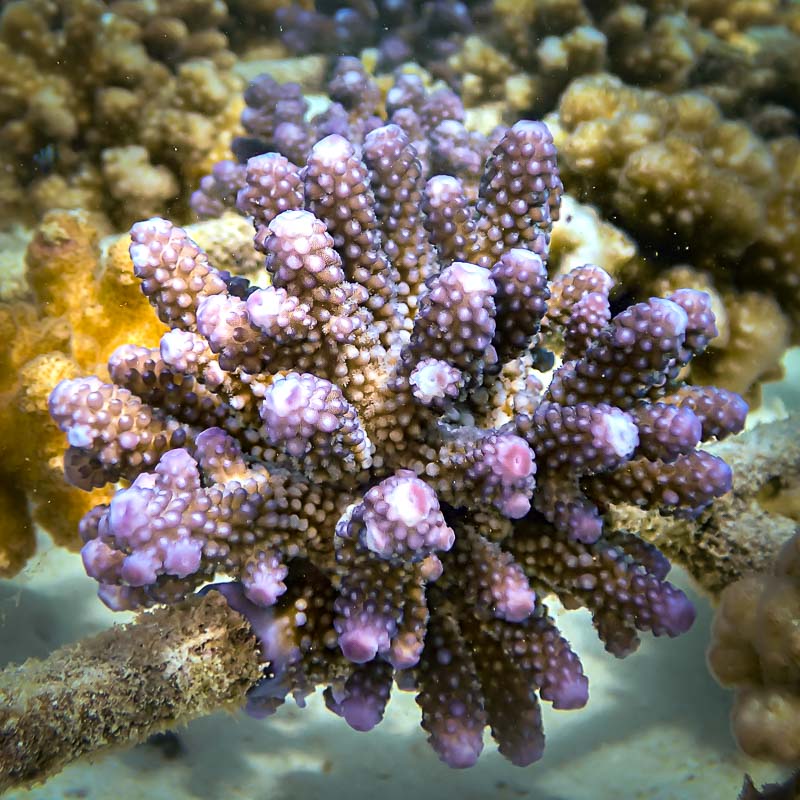 The most exciting news from the Reefscapers teams this October was the discovery of coral eggs and the anticipation of spawning! The Sheraton was no different and coral eggs were found in coral colonies of Acropora secale and Acropora squarrosa.

Coral spawn once a year (sometimes twice) and so it is incredibly rare. They take their cues from the lunar cycle, ocean temperatures and tide. Witnessing coral spawning is considered to be one of nature’s great spectacles. When corals are ready to spawn, they simultaneously release both sperm and eggs, called gametes, which float to the surface. The process of fertilisation occurs at the ocean surface, where sperm and egg join to develop a larva called planula.

Planulae float in the ocean, sometimes for several days. Eventually, they settle on the ocean floor and providing they encounter the right substrate, they can attach and grow into a new coral colony.

Successful spawning of restored corals would be a great achievement for the Reefscapers project. Restoring coral through our frames increases the abundance of coral in the Maldives and thus, increasing the amount of coral which can spawn, fertilise into planula, settle, and establish new colonies.

Our teams managed to witness spawning in October at Landaa Giraavaru and Kuda Huraa (Four Seasons Resorts). However, at the Sheraton the eggs were not yet matured. Fingers crossed our team, Amelie and Kate, can successfully film spawning this November either during the New Moon or after the next Full Moon. 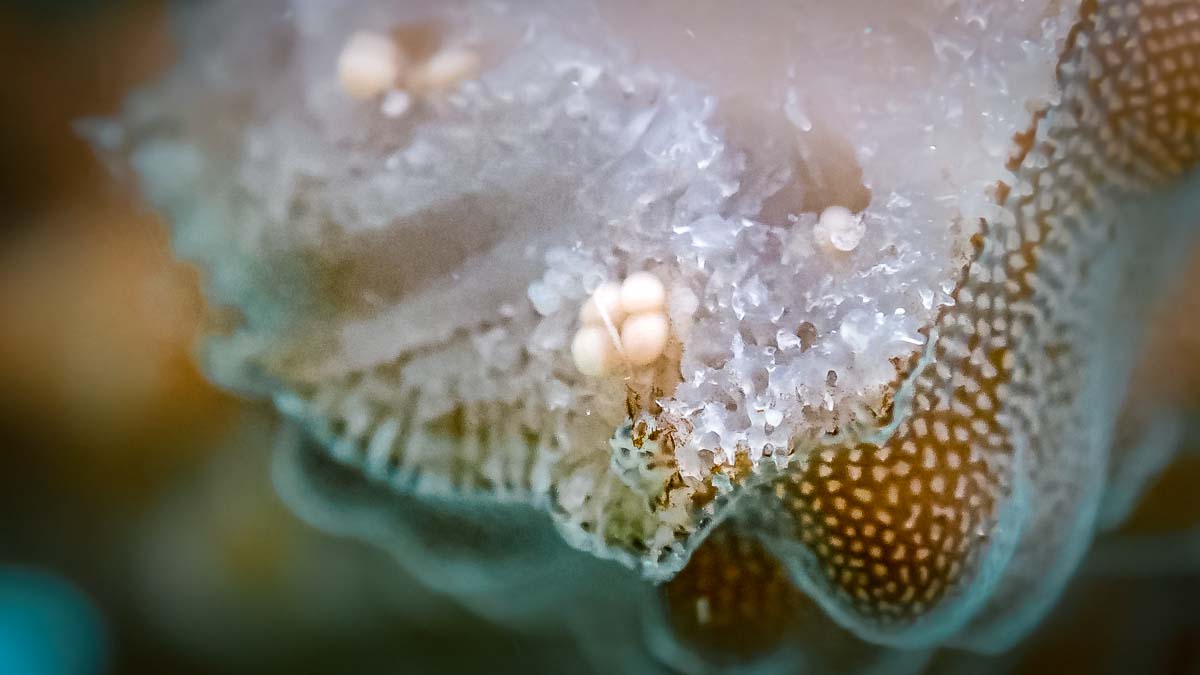 This month we have seen more and more wildlife making use of our coral frames. One animal making its home under one of our frames is a red octopus. This individual has made its hole inside one of our small frames and has been regularly seen by our team. Octopus are incredibly intelligent animals. They are masters of camouflage and can change their colour to blend in with their backgrounds. They also conceal themselves inside dens they build, such as the one under our frame. They pull rocks or shells in front of themselves to hide.

Not all residents are as subtle and sometimes our marine biologists encounter unexpected challenges when working underwater. Our Sheraton team noticed a Titan Triggerfish nest in amongst most of the coral frames at the resort. Titan Triggerfish can be extremely territorial, especially when nesting, and tend to chase anyone who comes near them! This makes monitoring the frames a little more complicated (and snorkelling a little less relaxing) but is it always a nice knowing fish are interacting with our coral frames and utilising the habitat we are creating. 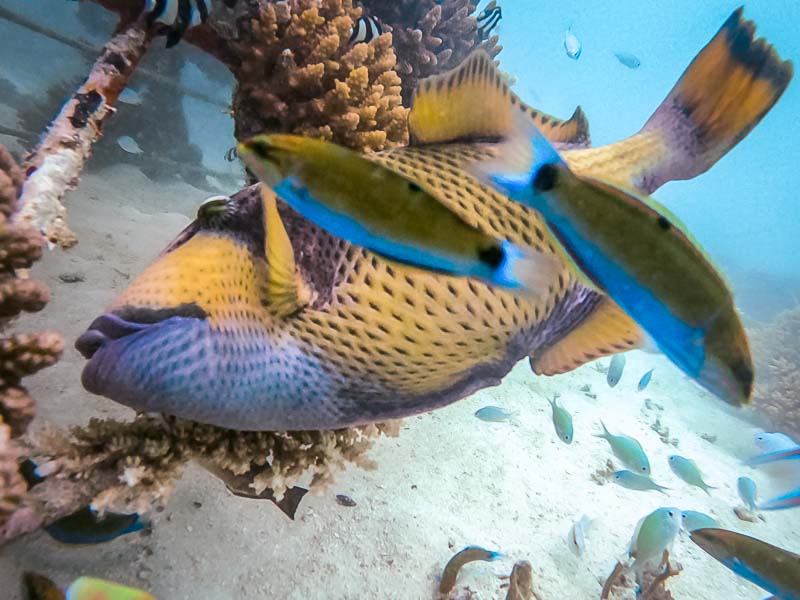 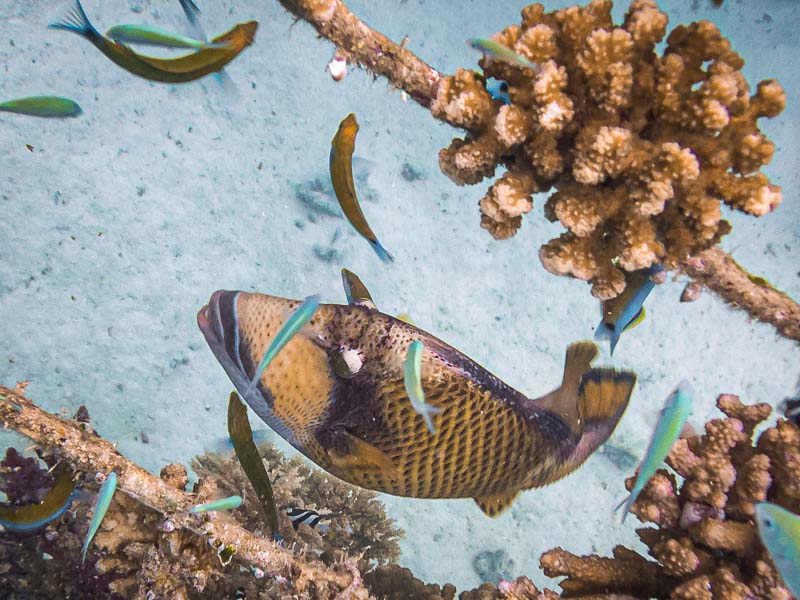 As new frames and coral eggs arrive, the reef manta rays in the North Malé Atoll are preparing to leave. There is a cleaning station around 15 minutes by boat from the Sheraton, and mantas have been frequently sited here by our team and other divers throughout October. However, in the last few days they have not been sighted suggesting they may have left the area.

A manta cleaning station is a point where mantas, and other large fish / sharks, gather to be cleaned by parasitic copepods and some species of small cleaner wrasse. Mantas will swim around these points, sometimes for hours at a time, having their gills, teeth and skin cleaned.

Manta season in the North Malé Atoll ends in November. The Maldives is home to a resident population of reef mantas, which migrate across the 26 atolls of the Maldives together with the changing monsoons and consequential changes in zooplankton (their food) abundance and distribution.

The spots on a manta ray’s belly are unique to the individual. The Manta Trust has a database of Maldivian mantas and so with their help, our Sheraton team have managed to ID the manta’s they have encountered, including Tropic Thunder pictures below, who has an old shark bite injury on his left pectoral fin. Luckily the scar has healed and doesn’t seem to cause him any problems – and it makes ID-ing him a little easier! 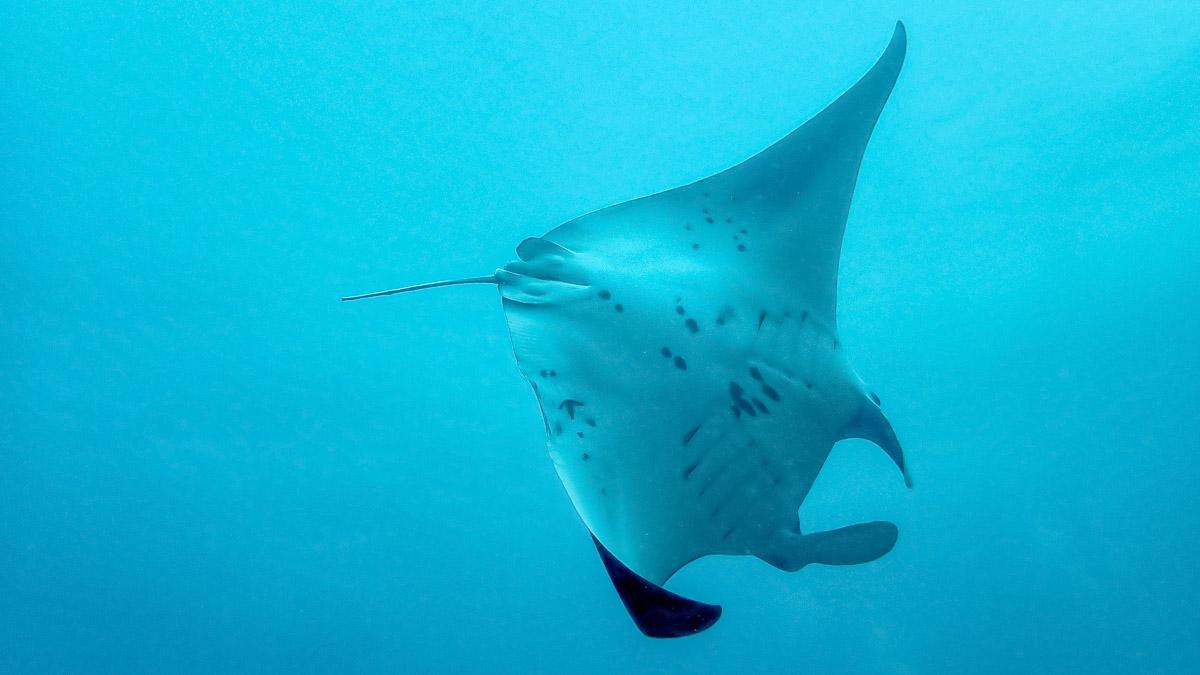 “Tropic Thunder”, a male reef manta photographed at a nearby cleaning [by Kate Sheridan]

Lastly, the Sheraton team have been blessed with some amazing cetacean sightings this month. Spinner dolphins have been spotted several times close to the resort, as well as on dolphin cruise excursions with guests. Our teams often join these excursions to speak to guests about the marine life and different dolphins’ species we have in the Maldives.

Like the manta belly-spots, individual dolphins can also be identified through their fins. Fin-shape as well as small marks or tears on their fins are unique to the individual. The Sheraton team are hoping to start using photo-ID software to build on an existing database to monitor local dolphin populations.

Overall, October has been a busy but rewarding month for the Reefscapers team at the Sheraton. As we enter the penultimate month of 2021, we are looking forward to seeing what more this year has in store for our corals! 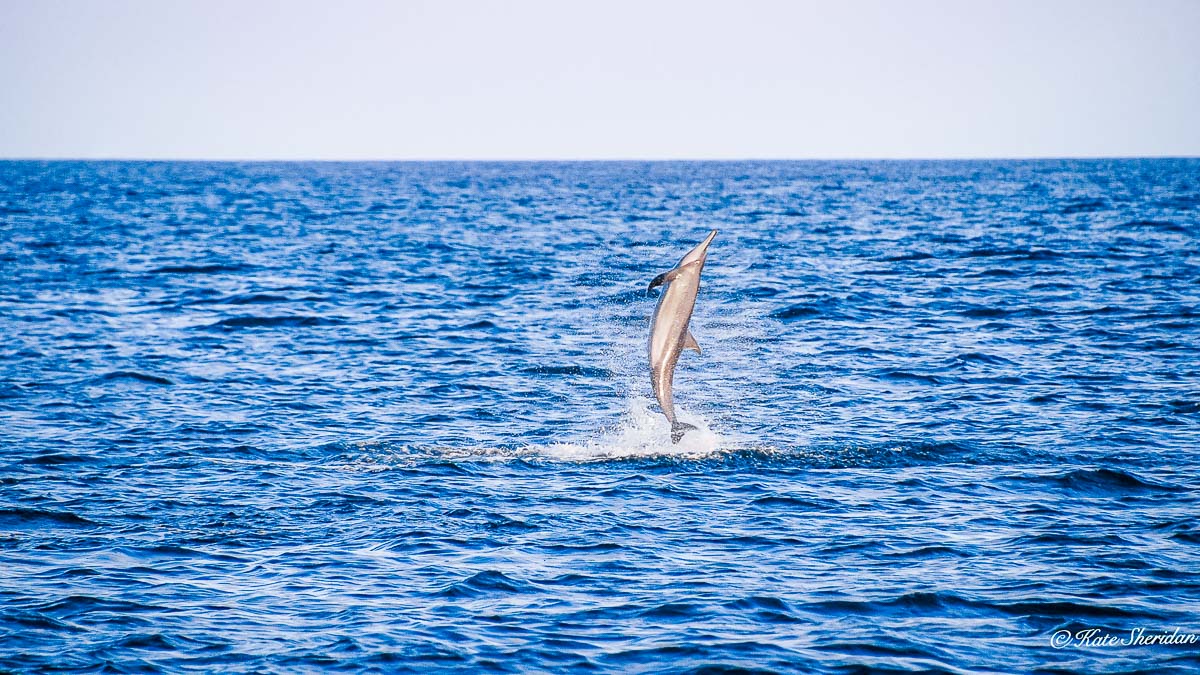 Spinner dolphin during a dolphin cruise [by Kate Sheridan]