Seeing in the New Year for Reefscapers at the Sheraton Maldives

The Reefscapers team at the Sheraton Full Moon Resort & Spa, Maldives, has had a busy start to the year! Coral frame SH200 was planted at the Sheraton on 24 January 2020, marking 200 frames in less than two years! The team has been busy maintaining the now 200+ frames, with new species of fish arriving and a greater abundance of marine life aggregating at the site than ever before.

Nearly 80 frames were monitored throughout February. Frames are monitored every six months to see the coral’s growth. Monitoring involves the team taking four photos of the frames from four different angles and uploading them onto our Reefscapers website, where every monitoring photo since the frame was built can be found. Since the first frames at Sheraton Maldives were built in February 2020, some frames have now reached two years old!

To see the progress of any frame at the Sheraton Maldives, please visit our dedicated monitoring page. 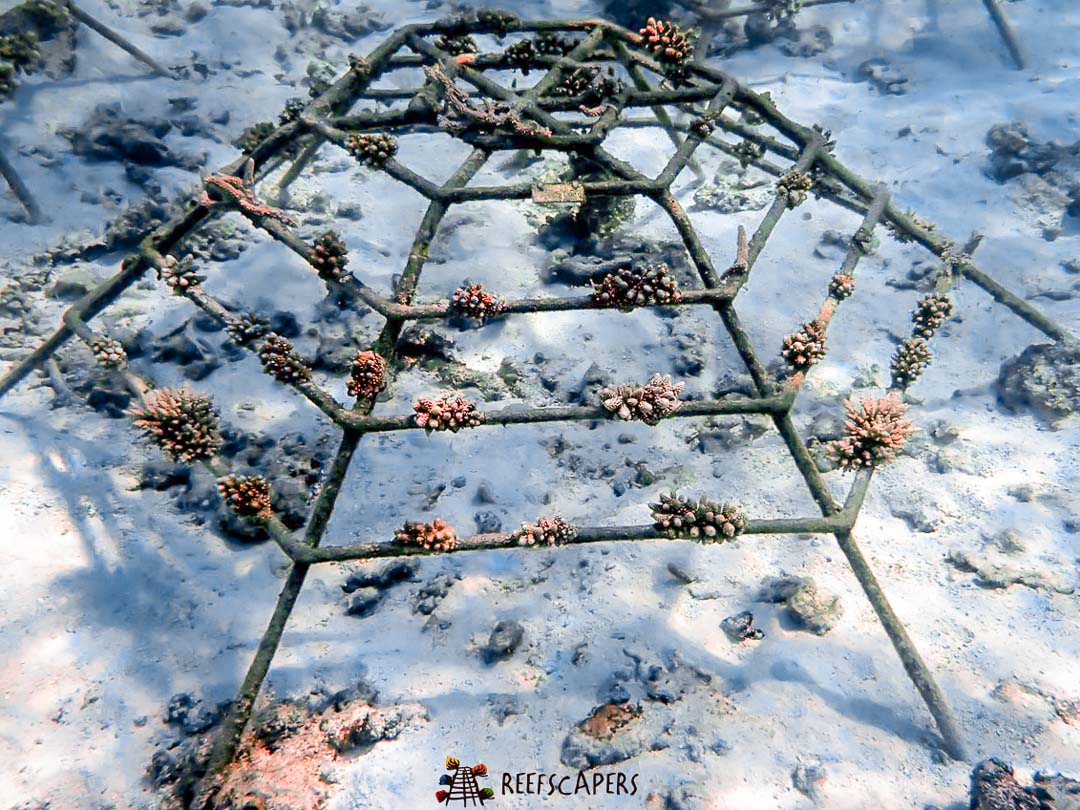 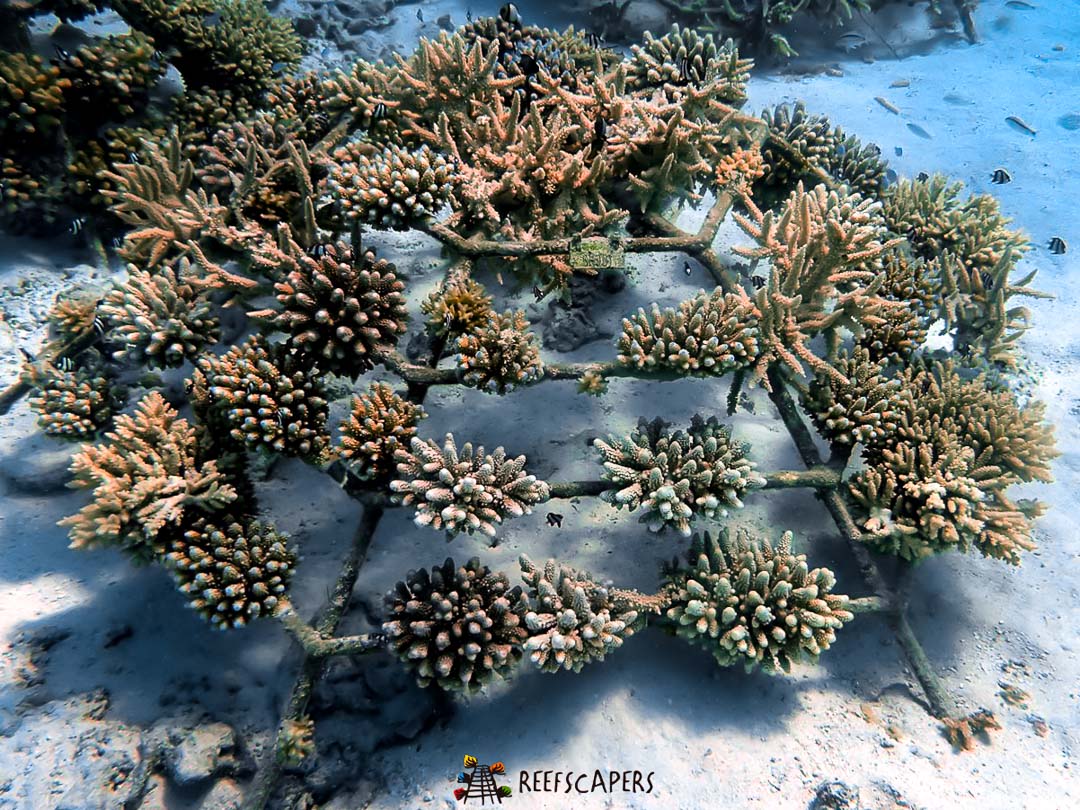 The growth of frame SH001 after two years 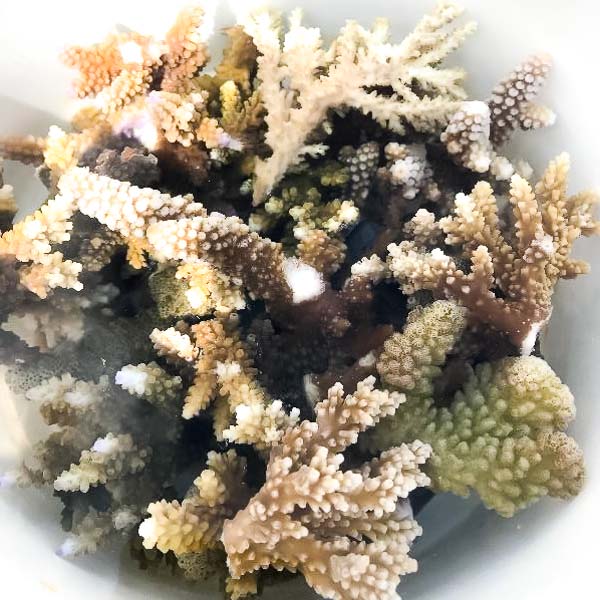 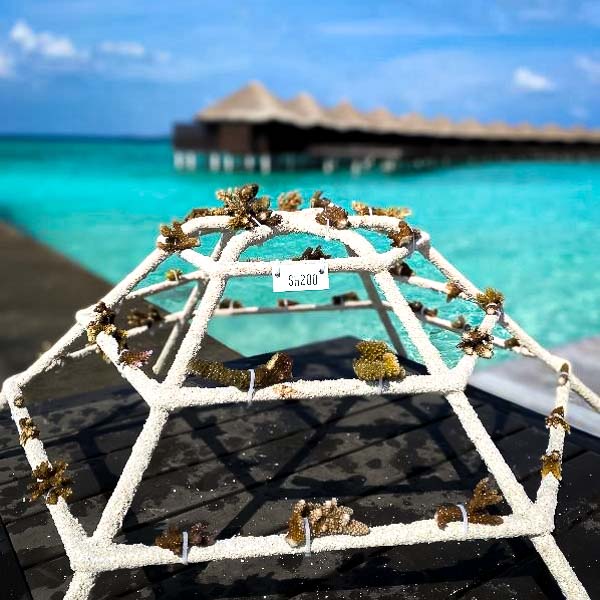 … to transplant our 200th frame at Sheraton Maldives!

Nurse Sharks at the Pyramids

On Boxing Day 2021, four tawny nurse sharks (Nebrius ferrugineus) were found sleeping under our coral pyramids during the day. They were first seen around 9.30am, and two of them were still there in the afternoon! They varied in size, with one individual measuring around 3m in length!

Tawny nurse sharks are classified as Vulnerable by the IUCN and have a decreasing population trend. The primary threat to this species, as determined by the IUCN, is from the fishing industry. Nurse sharks are seldom caught intentionally but are often victims of bycatch (unintentional catch in a fishery) and are sometimes kept and displayed for aquaria. However, the aquarium trade is small compared to the catch by fisheries.

Furthermore, the nurse shark’s dependence on coral reefs makes them vulnerable to the impacts of climate change and declining habitat quality. Coral bleaching events due to warming ocean temperatures (caused by anthropogenic climate change) have been increasing in their frequency and intensity, and as such species reliant on coral reefs are facing declines.

The team were very excited to see the sharks at the pyramids – only for the third time during daylight hours since the pyramids were built. It was a belated Christmas treat! 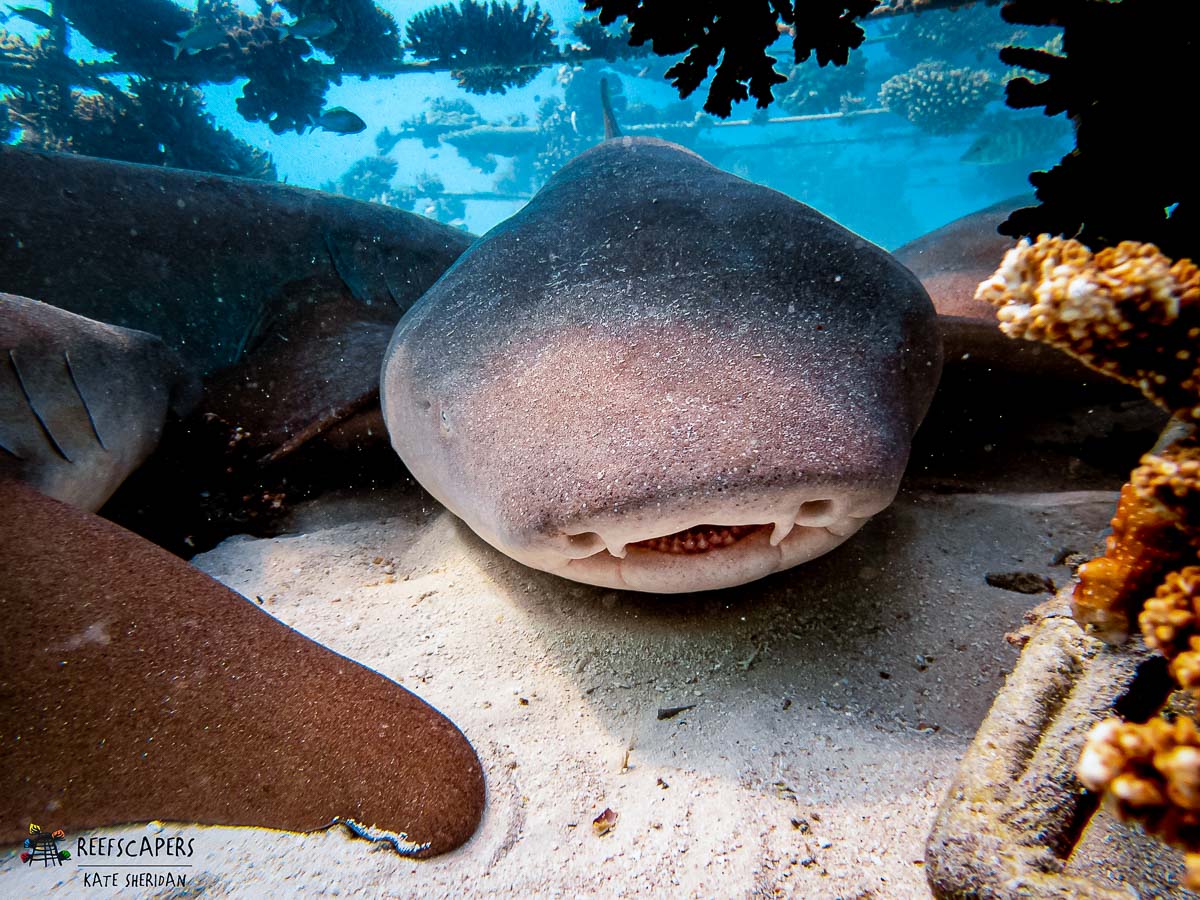 Pilot whale season has started, with two short-finned pilot whale (Globicephala macrohynchus) sightings in the last couple months. The first was a small pod at the end of December, and towards the end of February a larger pod was spotted near a neighbouring island.

Short-finned pilot whales can reach up to 7m long, and adults can weigh around 3,000kg. They are normally nomadic, found in both tropical and temperate waters. In the Maldives, they are typically spotted between January and April.

Spinner dolphins (Stenella longirostris) continue to be frequently spotted during dolphin cruises, with occasional sightings of bottlenose dolphin (Tursiops truncatus). Spinner and bottlenose dolphins can be seen in the Maldives all year round across the country. 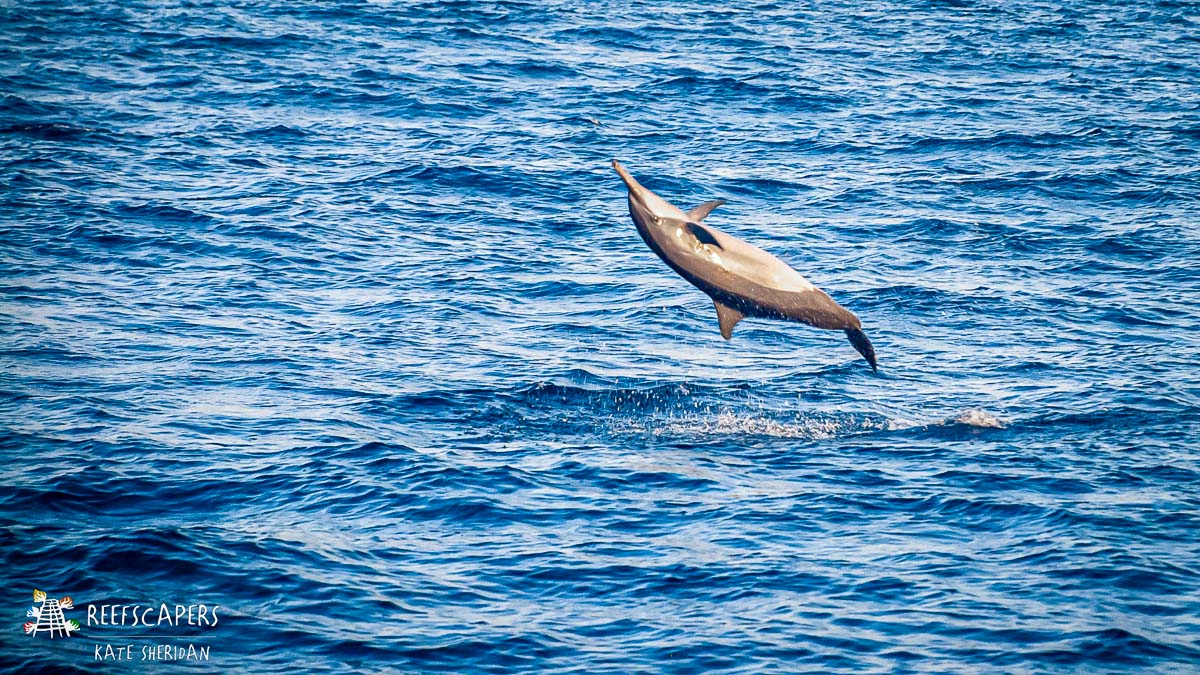 Spinner Dolphin leaping out of the water. Spinner dolphins spin to communicate direction, remove parasites, or just for fun! Photo by Kate Sheridan

One colony of Acroopra latistella spawned between the January 2022 new moon and the full moon, however, we did not witness this spawning so the specific date and exact timing are uncertain.
Eggs of Acropora gemmifera and Acropora humilis are starting to get pigmented, and so these colonies will be monitored throughout March and April to witness another spawning event and collect more data on this phenomenon.

The Maldives, 1,200 islands and one of the richest coral reefs on the planet, offering fish and marine animals an essential place to live. But this coral oasis is now in danger. 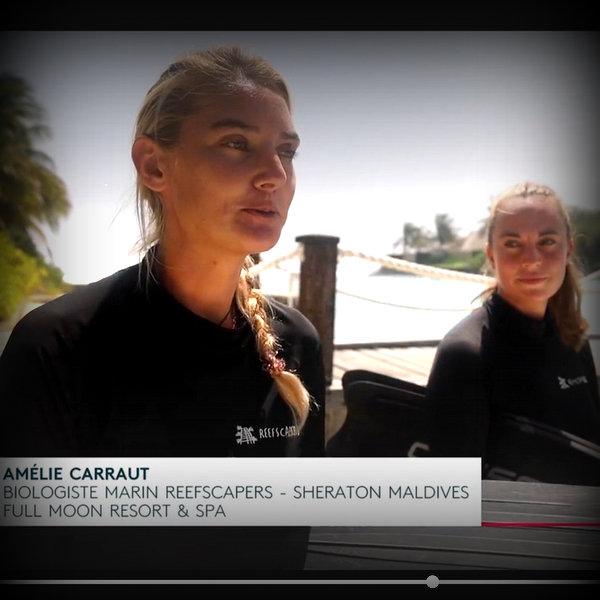 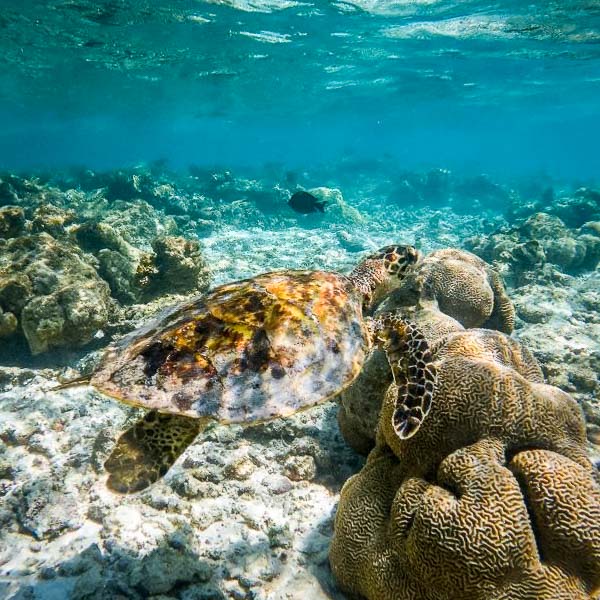 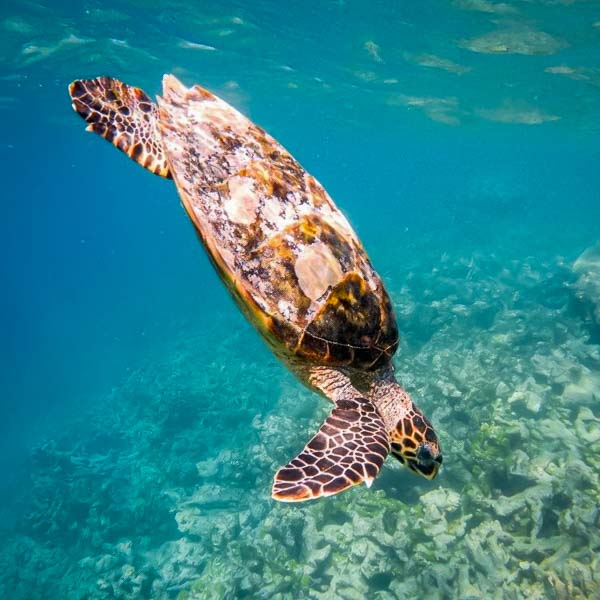 We submit turtle photos to the Turtle ID Project 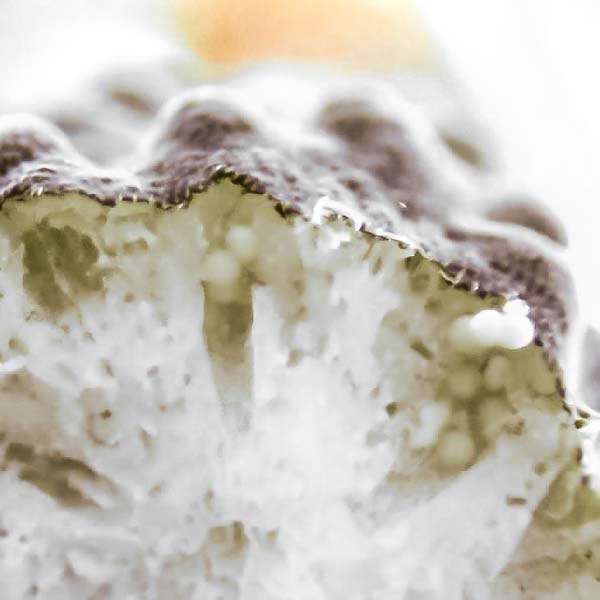 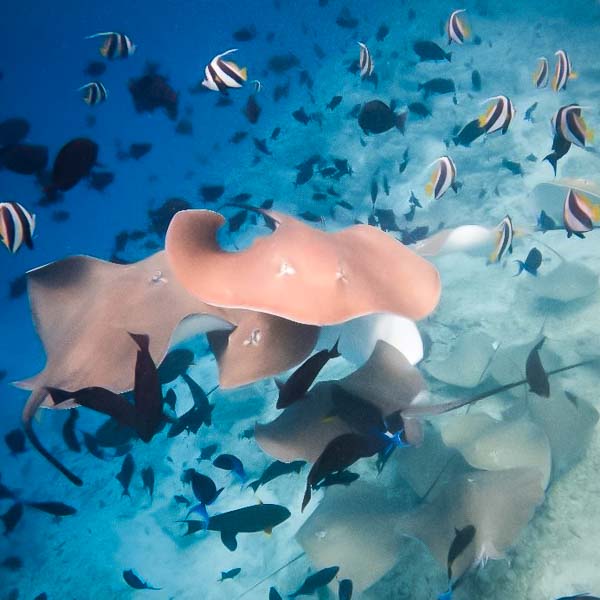 Pink whiptails at nearby ‘Stingray Point’