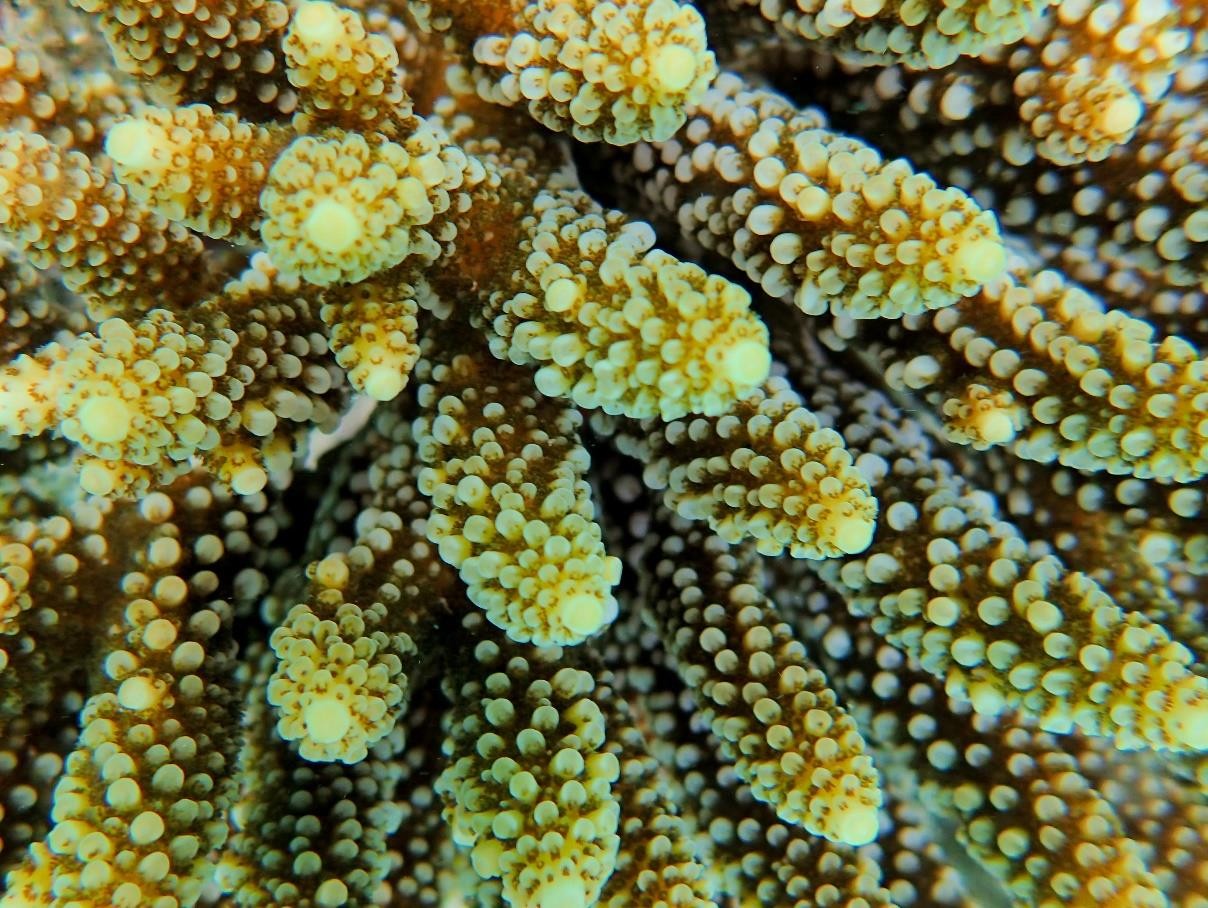 In February 2020, 50 frames were transplanted at the Sheraton Resort, all sponsored by Sheraton Maldives Full Moon Resort & Spa. These coral frames were transplanted on the north side of the island with 10 flat placed along the bridge that goes from the resort to the spa, 30 small, medium or large placed in a small depression on the west side of the spa in front of the water villas and 10 flat along the water villas. At low tide, the flat frames are about 1m deep and the other frames are between 2m and 3.5m.

These corals probably died due to the water temperature that is very high in this area with an average temperature of 30 degrees at the bottom. It can go up to 32 degrees at the surface. Depending on the season, algae grow relatively fast in this area which is also one potential reason why a lot of corals died. These frames are now maintained weekly by removing algae and ensuring that frames and corals are not being buried in the sand.

In November, 2020 5 frames (4 small frames and 1 heart frame) were adopted by guests from the Sheraton Resort and transplanted in the lagoon. All the new frames were placed on the west side of the lagoon next to a substrate with a few colonies of Acropora and Pocillopora that were placed there in June 2020. They are about 1.5m deep depending on the tide.

The 50 frames transplanted in February were monitored after new fragments were transplanted.  The corals that survived are well attached to the frames and have started to grow new branches.

All of the new frames were monitored and uploaded on the website. So far, corals seem to attach well to the frames. Fragments that were transplanted at the beginning of November are slowly beginning to encrust over the cable ties.

The 50 frames by the water villas and the spa are maintained weekly. At the moment, the visibility is poor with warm temperature and algae grow relatively fast in this area. The lower part of some frames also get buried in sand quickly. Dead corals were placed underneath the frame to ensure they don’t get buried.

The new frames are maintained regularly as algae grow relatively quickly in the lagoon and thus on the frames. The sand movement is also high in this area and stays on top of the coral fragments that could lead to bleaching if not maintained well. 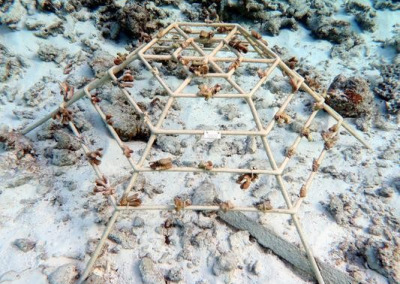 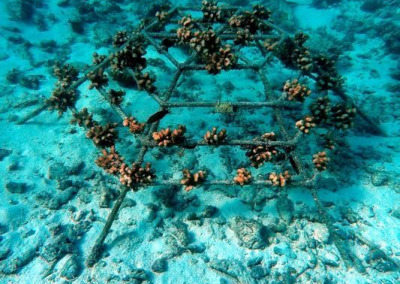 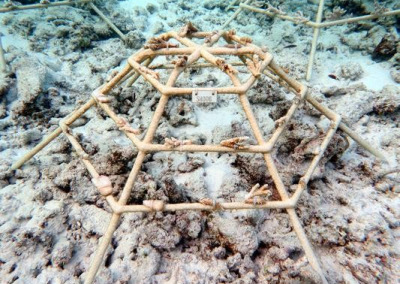 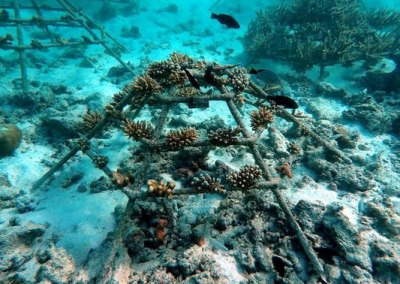 In May and June 2020, Reefscapers was appointed by the Maldivian Government’s Environmental Protection Agency (EPA) to relocate coral colonies of Gulhi Falhu to the Sheraton Maldives Full Moon Resort & Spa. These frames were placed in a pyramid shape in front of the dive centre and in the lagoon. There are 8 pyramids in front of the diving centre and 4 in the lagoon.

Overall, coral colonies are healthy and are adapting to the new environment. It is presumed that about 5% of the colonies died either soon after transplantation due to stress or difficulty to adapt after transplantation. As these frames were not monitored since June 2020, the date at which they bleached then died is not known.

Dead coral colonies were removed and hidden underneath the frames to ensure it is the least visible by guests when they dive or snorkel in this area. Some of the coral colonies that died were Acropora cytherea, Acropora digitifera and Pocillopora. Some coral colonies probably died because of the relocation and difficulty to adapt to the new environment.

Healthy coral colonies are attaching well to the frame and are started to grow. Tables corals are also growing horizontally on the frames as the pedestal is tipped over.

After dead colonies were removed, coral fragments were re-transplanted on the empty space of the frames at the beginning of November and throughout November. These fragments are already attaching well to the frames.

A few sponges are growing on the frames which could potentially be an issue with time but they are being removed and maintained regularly. Ascidians such as Didemnum molle are also growing on the corals and being removed when needed. One or two colonies were covered by the coral-eating sponge Haliclona nematifera. 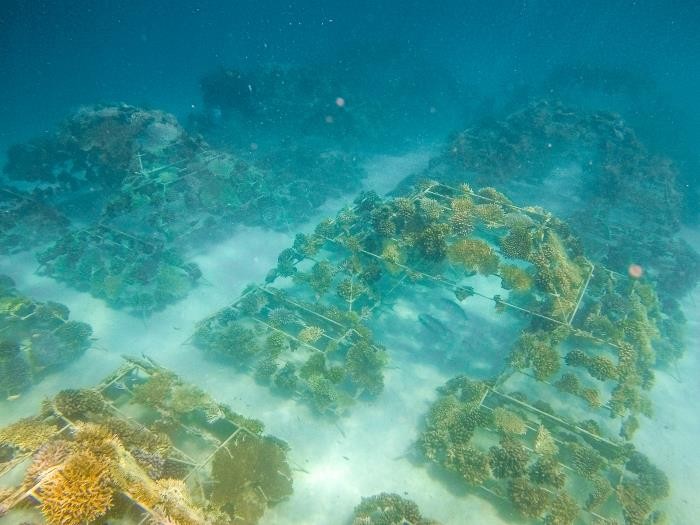 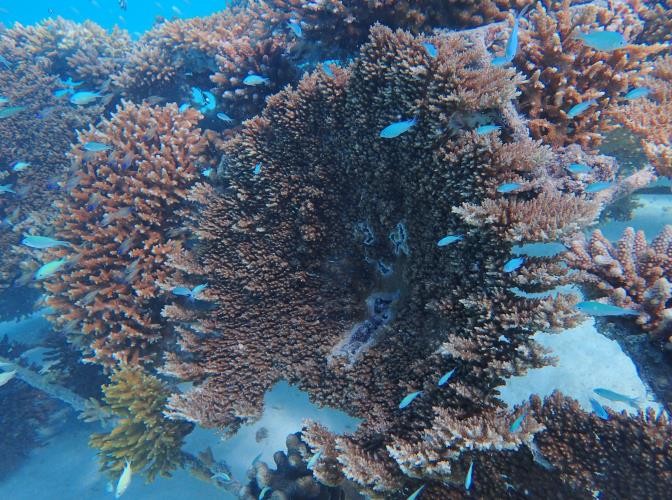 Overall, coral colonies in the lagoon are also doing well. It is presumed that 2% of the coral died. Corals colonies are attaching well to the frames and some colonies are also starting to grow. The visibility is very poor in this area and it is difficult for guests to snorkel above those frames.

There is still a lot of maintenance to do in the lagoon such as re-transplanting coral fragments on empty spot on the bars, removing a few other dead colonies and ensuring that there is space between coral colonies to avoid competition. Due to the sand movement, some coral colonies on the bottom bars of the frames are sometimes being buried in the sand which can lead to bleaching. This has to be maintained well to see if this is becoming an important issue.

Coral have to be maintained regularly by: 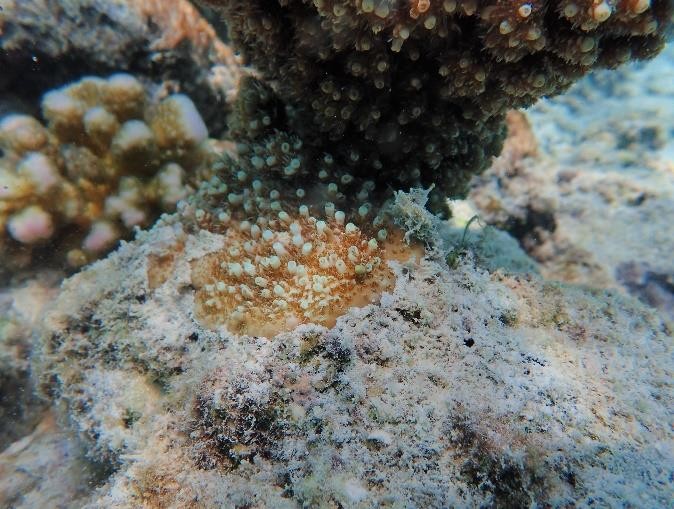 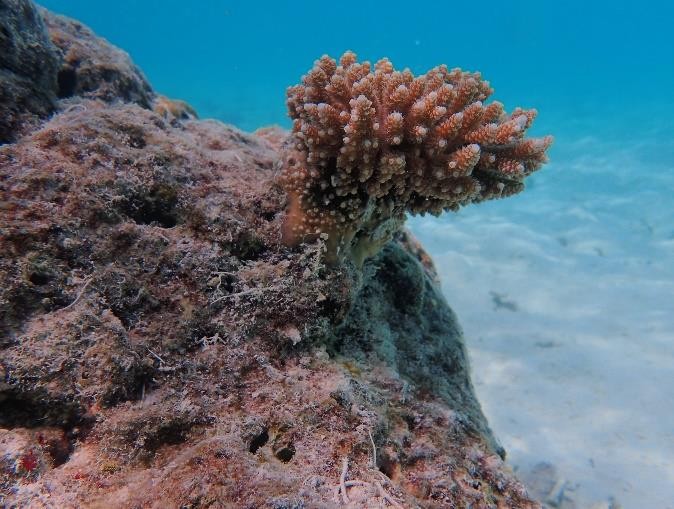 2.4. Acropora and Pocillopora in the lagoon

Acropora and Pocillopora species were placed on the north-west side of the depression on a hard substrate in May/June. These corals were placed in between rocks or holes to ensure they will attach to the substrate and not be taken away by the current. Overall, they attached well and most of the Acropora species are already well attached to the rock. Fragments that were not well attached have been re-placed on a hard to substrate to attach and will be monitored. Some coral colonies died due to either stress, water temperature or sedimentation. New coral frames have been placed next to these coral colonies.

This is a shallow area where guests can easily walk so educating guests on the importance not to touch or stand on corals will be important.

Massive coral colonies were placed along the water villas in June 2020.  They were placed in between rocks or corals to avoid them to roll over as much as possible and some underneath the bridge at the spa. Overall, they are adapting to the new environment and most of them survived. However, with the current, some of them rolled over and bleached. More maintenance is needed to ensure they don’t roll especially when there will be strong current in this area.

A coral monitoring system is going to be implemented in December to follow the health and growth of the corals. Frames will be monitored and photographed from on each side and from above. 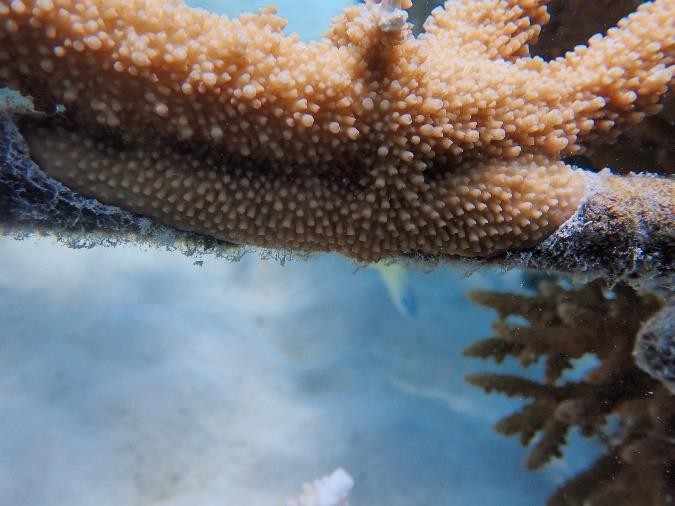 Healthy coral colony growing onto and over the metal frame 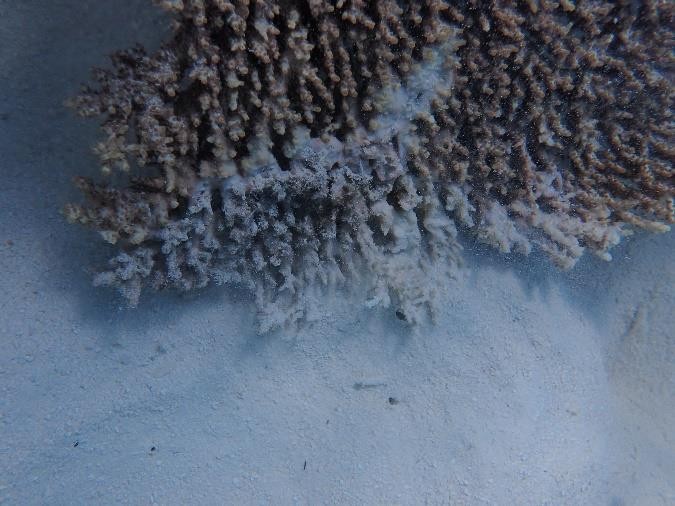 The marine biologist of the Sheraton is now participating in marine activities with Watersports. This includes snorkelling safari, reef snorkelling, dolphin cruise and occasionally diving. In November and especially beginning of November, data during snorkelling trip were not recorded so data below are not well representative of the actual megafauna of snorkelling excursions. Data will be recorded daily in December.

During the month of November, a total of 23 sharks, 3 turtles, 70 rays and 12 fish were sighted during snorkelling or diving excursions.

Spinner dolphins (Stenella longirostris) is the most common species sighted in the surroundings of Sheraton Resort and they were seen on each dolphin cruise this month. Recording of the number of individual, number of guests attending and the most common behaviour was not done this month and a recording system will be put in place with Watersports for December 2020.

3.3. Marine activities in the resort

Marine presentation will be done 3 times a week with presentations about coral reefs, dolphins and sharks and rays. A turtle activity is also in the process of creation.

2 activities a week will be put in place with kids club to create marine activities for kids. One activity will be to “Build a reef” and the other one will be an activity on turtles. They are slowly being implemented in the resort.